The Higher Education for Social Transformation (HEST)  is a programme promoted by the JCEP (the Jesuit Conference of European Provincials) and the Kircher Network. It is envisioned as a fifteen-year, pan-continental, cross-disciplinary endeavour.

The goal is to produce meaningful and quality research on seven  concrete topics that can be communicated to a range of audiences so as to promote progressive advocacy in each area. 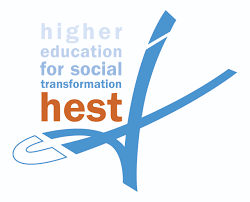 This cluster was conceived as an opportunity for Jesuit Higher Education Institutions in Europe to collaborate in building a narrative based on Laudato Si’ and on the CG36 decree.Some work has already been done, i.e. Stockholm Dialogue on Sustainability Science and Values and GIAN-Ecology Network, these initiatives are to be the foundations and the partners for the HEST Cluster on Ecology.

The concrete questions we are addressing are the following:

Europe is experiencing specific manifestations of the crisis, especially around its joint project of the European Union. A project that is more confronted than ever with its citizens and that has been transformed by the crisis and the enlargement to the new partners. That’s why the debate on the validity of the foundations of the European Union is more relevant than ever.

In a wider perspective, beyond Europe, the special report of the Social Justice and Ecology Secretariat points 5 big challenges for our society:

severe poverty, social wounds of inequality , The risks of contemporary financialization, the injustice of violence or the neglected fragility of the land as our common home.

The special report is clearly inspired by the Apostolic Exhortation Evangelii gaudium of Pope Francis and his references to the effects of the economy of exclusion, the idolatry of money, money that governs instead of serving, or inequality that generates violence.

The report also hopes to appeal to the new vision (Promotio Iustitiae No. 121, 2016/1, 23): “To be effective, any response to these challenges of poverty, inequality, unregulated financialization, social conflict and Environmental degradation will have to be shaped by a strong vision of the common good. By participating in the common good, people are linked in a shared social life, which enables them to realize their human dignity. The effective promotion of the common good counteracts the serious threats posed to human dignity by the realities of poverty, inequality and social conflict. (…) A vision of the common good of the human community and the ecological community will therefore be an essential guide in responding to the challenges pointed out by Pope Francisco”

From this analysis and after the first meeting which helped us place in the activities that each institution was carrying out, the coordinators of the cluster promoted a process of consultation that eventually came up with a proposal to divide the work of this cluster into two complementary research projects, and the invitation to the researchers to link to one of them. The first would be about the concept of humanistic management of firms and the second on the welfare society and the basic income. Two concept notes have been developed for each project and contributions are already being collected. The short-term objective will be to develop technical articles on the subject in order to propose a joint publication.

The topic on Christian Muslim Relations gathers a cluster of Jesuit Higher Education Institutions working on the study of Islam itself, Christian-Muslim interreligious dialogue and dialogue with Islam on social issues. Because the majority of Jesuit institutions interested in Christian-Muslim relations are already part of the Pluriel network, in dialogue with the Pluriel coordination committee, we foresee coordinating our efforts for the HEST project within Pluriel’s network. Therefore, we are moving in the direction of creating a subgroup of institutions inside Pluriel, working among themselves, but also sharing the same common goals of the entire network.

The main trait that all the members have in common is the will to approach Islam and Christian-Muslim relationships in a way that reflects Ignatian spirituality’s main characteristics. The development of an Ignatian inspired methodology of dialogue with Islam – in the line of past historical contacts between Jesuits and Muslims – becomes then a main goal of our cluster.

Because on the main traits of Ignatian spirituality is the desire to contemplate our present world as God does and be moved to action by that contemplation, we take as a goal in our cluster to develop a certain transformative social influence in the field of dialogue with the Muslim tradition. This goal coincides with HEST ultimate inspiration. This influence is extremely needed in fields like education, social integration of migrants, development of religious freedom and other basic rights.

At the same time, as scholars, we feel responsible for doing a high quality and rigorous academic work that includes a deep and long study of Muslim and Christian sources. Only such a work may actually contribute to real progress in Christian-Muslim interreligious dialogue and may offer the Church a view of itself that overcomes prejudices and facilitates entering in relations and working with Muslim communities.

In the best of the Jesuit tradition we want to articulate such rigorous academic approach with a more transformative one as the best way to produce real and fruitful knowledge. The diversity of our institutions and of their contexts may be very helpful in order to achieve such an articulation.

All these efforts will necessarily require a direct contact with Muslim communities and individuals, our relationships and friendships with them will make real our desire to contribute to Muslim-Christian dialogue. We hope to share and foster such key relationships.

Ultimately, as scholars working in this fields and as members of Jesuit institutions we want to be an instrument at the service of the Society of Jesus’s mission in Europe and the Near East, which has as one of its priorities the Christian-Muslim relationships. .

The cluster on the Dialogue Science-Religion of HEST found a consensus on the theme for the research work of the cluster: “power” as a key concept for the dialogue between science and religion. Josef Quitterer, dean of the Faculty of Philosophy of Innsbruck, offered to prepare a concept note on that. In April this document was distributed to all the members of the cluster requesting contributions to it. At the beginning of the next term the coordinators will organize a webinar to pool these contributions and set out the lines to follow. This methodology of periodic webinars will be used by the group to ensure the continuity of the research.

This cluster first met in Rome but no specific research lines were defined for the cluster. Nevertheless, a dialogue was generated about the importance of the Ignatian legacy for the Society of Jesus. On 22 September 2017, in Brussels, we had the second cluster meeting. It was a very fruitful one in which several possible topic for the future work of the cluster emerged:

European societies are profoundly shaped by science and technology, with their ideal of controlling things and situations. In this context, contemporary visions of the human being are often in tension or even conflict with the models coming from classical humanism or theological anthropology.

Three particularly important areas can be identified where the understanding of the human person is being reshaped: the relationship between person, body and brain; what the limits on the demand for unrestrained autonomy imply about the human person; and the rise of human ways of life and quests for meaning without reference to God.

The cluster will meet for the first time on November 21st and 22nd (2017) in Madrid. However, we have started some activities: (1) mediating between Comillas IUEM and the JRS Europe office to promote a doctoral research work and (2) starting a dialogue with Michael Czerny, Under-Secretary at Migrants & Refugees Section at the The Vatican department for Promoting Integral Human Development about a future collaboration between HEST and the Vatican.